I've decided to change the name of my blog to Vox Sola.  It seemed more fitting than My 101.  Vox sola means "one voice" in Latin.  It also happens to be a Star Trek reference, which is rather fitting for me.  Also, this blog covers more than just my 101 in 1001 list and eventually that list will be finished and the name really won't make sense anymore.  So I've changed it.

It also happens to be the name that I picked on Twitter.  I'm @vox_sola over there.  So far, I mostly created it so I can easily follow some of the celebrities I enjoy like Wil Wheaton (@wilw), Amanda Tapping (@amandatapping) and Jenny Lawson, aka The Bloggess (@TheBloggess) along with a few others.  I doubt I'll be tweeting much, but if you're interested, feel free to follow me.
Posted by Megan at 9:33 AM No comments:

My latest book was Packing for Mars by Mary Roach.  I'd heard good things about the author from both Epbot and from a Nerdist podcast where they interviewed Jeri Ryan.  The premise sounded interesting so I picked it up from my library.  Mary Roach writes books on scientific topics, but presents them in a way that is not only easy to understand by those outside the field she's studying, but also funny.

Packing for Mars is a collection of information about the current NASA program.  It covers early NASA missions and some of the issues they faced along with how new technologies are tested before they're sent into space and information on the potential for our journey to Mars.  The book was published before NASA's budget was basically decimated, so some of the information doesn't stand anymore (like dates about when we might try to visit Mars), but the information in the book is still really interesting.

I love getting my scientific information from someone so funny.  She shares some of the stories that she finds that don't generally see the light of publication, which not only shows the reality of what's happening, it makes her a more credible source.  I could definitely tell that she did a ton of research.  She also participated in a lot of the activities herself (when she could), such as a parabolic flight to feel weightlessness, and a visit to Devon Island to see how NASA prepares for missions on the moon or Mars.  The book is by no means comprehensive (that much information wouldn't fit in a single book), but it does give a good idea of what it takes to be an astronaut and how much planning goes into sending humans into space.  I highly recommend this book.
Posted by Megan at 3:00 AM No comments:

Happy Birthday to Me

My birthday was ten days ago, but I'm just now getting a chance to write about the awesome gift my husband got me.  Technically, I asked for it, including sending him the link in the right size.

I got this baby: 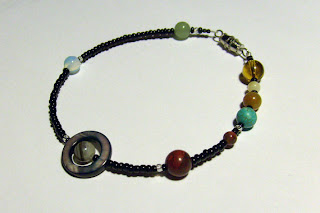 I borrowed the photo from the seller's listing.  I found it on Etsy from a shop called Chain of Being.  They're out of Alameda, CA so for me they're relatively local, which was an added bonus.  The only downside was that it took almost a week to be shipped, though it did arrive fairly quickly after that (and I realize that the seller has no control over how long it takes to arrive once they send it).

Outside of the slowness, I love this bracelet.  It's well-made and gorgeous.  Plus, it's nerdy without being obviously so.  In case you weren't sure, it's the planets of our solar system along with the sun and the distances between them are proportional to the actual distances between the planets.  Each of the tiny black beads represents about 40,000 miles.  A lot of work went into making these and I think it paid off.  I've worn my bracelet since the day I got it.

The seller has a lot of other cool nature-based jewelry including a necklace with the different layers of the atmosphere and one that looks like veins and arteries.  You should definitely check it out.
Posted by Megan at 8:45 AM No comments:

This weekend my husband and I went to see Prometheus.  I have to say I had high expectations for this movie.  The trailer looked awesome and it had so many great names attached to it.  Unfortunately, it was a bit of a letdown.  It felt like they put all of their money into graphics and special effects (which, admittedly, were awesome), but they forgot to put enough money into the story.  It seemed like they wanted to have a big ensemble cast, but they didn't develop the characters enough.  The characters would make random decisions that felt completely contradictory to how the character had been up to that point.

The acting is decent.  Charlize Theron does a great job (when does she not?) and Noomi Rapace did a pretty good job too.  Outside of that you barely get to know any of the other characters so they don't really have a chance to shine.

Like I said, the graphics are amazing and there are some really cool shots, especially at the beginning.  Also, the setting that they chose for the beginning shots is incredible (it turns out it's in Iceland).  That said, it doesn't make up for a weak plot and poor characters.  I don't recommend seeing this one in theatres.  Save your money and get it from Redbox in a couple months.
Posted by Megan at 8:46 AM No comments:

I finished The Book Thief by Markus Zusak last night and I have to say that I loved this book.  It's told from the point of view of death about a young girl who steals books.  He develops a fascination with her and ends up telling a story about her adolescence and experiences growing up in Germany during World War II.

The writing style is different than usual, which took me a few pages to get used to.  It's totally worth it, though, because it adds something to the book.  It's a bit haunting as well to hear so much about death.  However, it completely makes sense considering the time period.

The story is beautifully told and has very rich descriptions without seeming over done.  Dialogue was very realistic and if you read it you'll even learn a handful of swear words in German.  It makes sense in context, though.

The author has written a couple other books and I'm hoping to find at least one of them at my library.  I couldn't find them in the bookstore last night, but I was a bit rushed.  I highly recommend this book.

I read Wil Wheaton's blog religiously and he's mentioned a few times that a friend of his does this podcast called The Nerdist.  That little tidbit stuck in the back of my mind, but I didn't really do anything about it.  I've been really bored with my current music selection and I wanted something else to listen to while I'm by myself at work so I decided to check it out.  As it turns out, it's not the best idea for something to listen to at work because I'm too busy laughing hysterically to get much work done.  I learned that the hard way when my coworker came back from lunch and looked at me like I'd lost my mind because I was crying from laughing so hard and I was all by myself.  That said, it's still awesome and something you should definitely check out.  So far I've only listened to two of them (the one with Wil Wheaton and another with Jeri Ryan), but I can't wait to listen to others.  I highly recommend it.
Posted by Megan at 8:35 AM No comments:

Email ThisBlogThis!Share to TwitterShare to FacebookShare to Pinterest
Labels: reviews

I just read The Kite Runner by Khaled Hosseini, which is the story of Amir and his life growing up in Afghanistan.  It starts out when he is about twelve years old and covers his relationship with his best friend, Hassan, and his father throughout his life.

This book was incredible.  Engaging and descriptive writing that really gave me an idea of what it was like to grow up in Afghanistan during the last thirty years or so.  Not only that but it tells a very touching story that left me heartbroken a few times.  The book isn't exactly full of twists (though there is one big one), but it wasn't needed in order to keep me connected.  I read the book in four days while doing plenty of other things (including getting attacked by a bee, but that's another story).

I will say, there are at least two parts that are disturbing.  Had I know that they were coming, I might have skipped reading it, so if you tend to be sensitive, I would recommend skipping this one.  However, the story that is told is beautiful and well worth those few moments.
Posted by Megan at 3:00 AM No comments:

Snow White and the Huntsman

Yesterday my husband and I wanted to get out of the house so we decided to go see a movie.  We checked out what was playing and picked Snow White and the Huntsman.  I was a little wary since I can't stand Kristen Stewart, but the trailer looked good so we decided to go for it.

It's an interesting way of doing the traditional story.  She still meets the dwarves (though they have different names) and she eats the poison apple, but it happens a bit differently than in the Disney version.

Chris Hemsworth plays the huntsman (who is never given a name) and he does it well.  I sort of expected him to play the traditional hero, but he's not.  He's a bit reluctant to help and he's a drunk.  As expected, Kristen Stewart is less than stellar.  I just couldn't get into her as Snow White.  She just seemed so useless.  It was partially the writing, I'm sure, because she wasn't really given a chance to do much until the end, but it seems like she should have had something to do other than just relying on other people to help her.  Charlize Theron is amazing as the evil queen, though.  She gives an incredible performance that left me with goosebumps more than once.  She was certainly the highlight of that movie for me.

The movie was very well done, and there are some really interesting cinematic effects, but I just couldn't get over how lackluster Snow White was, both in the way she was written and in the performance.  I realize that Snow White isn't supposed to be the hero of her own story, but it seems to me they could have given her something to do or some sort of magical powers, since she's supposed to be the only one who can take down the evil queen.

Overall, not my favorite movie, but still worth watching if for no other reason than to see Charlize Theron's scenes.  There's another Snow White movie out this year with Julia Roberts and I'd be curious to compare the two.
Posted by Megan at 8:31 AM No comments: