Why my Husband is Awesome

When my birthday was coming up back in June, the hubs asked me what I wanted.  The only thing I could think of was the bracelet that I really wanted, which he did get for me, but he felt like it wasn't enough.  He said he wanted to make me something, which meant he would finally get to use the compound miter saw I got him for Christmas.  Really, I think that made it a present for both of us.

I threw out a handful of ideas like a hutch for the kitchen (he thought that was too complicated for his first project) and a new bookshelf since mine has no room and there are books stacked on my desk instead.  He didn't like that idea either.  Then I remembered that when we were still renting and had no backyard whatsoever, he promised me that he'd make me a picnic table someday when we had the space.  So I asked for it, and that's what I got.  He started out with some blueprints he found online (sorry, I have no idea where) and then adapted it so it would be much larger because we have a big family.  It now seats 8 people (4 on each side) and we have enough room to add a chair to either of the ends.  So it will last us a little while before we start needing to add an extra table. 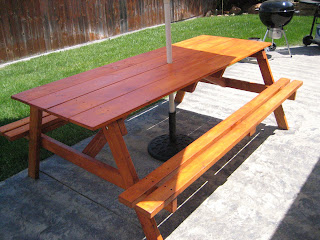 He stained it with a redwood stain, but it's made from pine.  He also drilled a hole in the center so that the umbrella my in-laws bought us over a year ago would finally have a home. 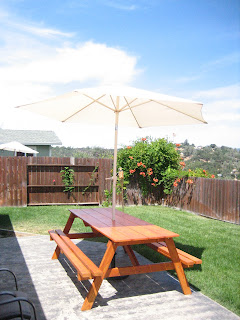 I realize you can't really see the umbrella in this pic because it blends in with the clouds, but it's there.

I love sitting in the shade at this table and watching the amazing view we have from our backyard.  I can't wait until the next big get-together we have where we can actually sit outside and eat and have room for everyone.
Posted by Megan at 3:00 AM