I know I've been a lazy blogger, but we've been super busy around here.  It seems that everyone I know is having a baby right now.  Hubby's cousin just had hers a couple days ago, a friend is due in a little less than two months, my nephew will be here in January and my best friend has one due in April.  That's not including all of the acquaintances that are expecting as well.  So I've been in baby crafting mode during most of my free time.

I met my friend Tracie at work and we instantly became friends.  When she told me she was pregnant, I was so excited and I knew I wanted to make something for her little one.  I pestered her for a long time to pick a name for her little guy so that I could get started.  I spent last weekend putting this baby together. 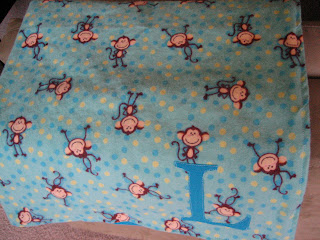 Please forgive the horrible lighting.  I wanted to get these done quickly so her gift could be wrapped up.  It's soft flannel with monkeys on one side (which sort of matches her theme for the nursery) and a pretty blue on the other. 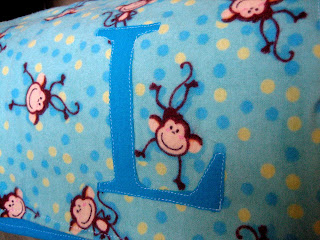 I added an L for baby boy's name.  It's not perfect, but I'm pretty happy with the way it came out.  I can't help but laugh when I look at this now because less than an hour after I had completely finished the blanket and cleaned up my sewing space, Tracie texted me to tell me her husband is second guessing the name and says he doesn't like it anymore.  Great timing, eh?  Fortunately, baby's last name starts with an L, so I told her that if they change his name we'll just say it's for his last name.  I also told her she wasn't getting any more monogrammed gifts until after he's here and the name can't change.

Now just two more months until he makes his appearance and gets to snuggle up.
Posted by Megan at 9:18 AM